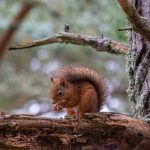 Which Way to ‘Nature’?

I vividly remember visiting the newly opened Landmark visitor attraction at Carrbridge in the Scottish Highlands, many (!) years ago. At the time its design and purpose were innovative and exciting – a tree top walkway among the ancient Scots pines, offering the possibility of spotting all sorts of rare and special wild things such as red squirrels, crested tits, pine martens, crossbills and capercaillie. I also vividly remember the mild disappointment of not seeing anything wild at all, but that disappointment also taught me a valuable lesson – that to you can’t always just buy a ticket and expect the wildlife to put on a show.

So what, you may ask, has that wee story got to do with a self-catering cottage near Loch Lomond?

One of the many things I’ve appreciated living here is that there is always something wild to see – or hear, or even smell. ‘Nature’ is not a visitor attraction, it’s all around us. Without setting foot outside, you can take in the constant soap opera around the bird feeders, dominated by our resident flock of house sparrows. They graciously share with a host of other birds, including the bold nuthatches and a striking family of spotted woodpeckers. Over 30 species of bird have been noted in the garden and around the cottage.

Taking time to be outside at night often pays off – often, when it’s very still, it’s possible to hear the rarest thing – complete silence. In winter the great constellation of Orion passes across the sky in front of the cottage, and occasionally if you’re lucky and outside at the right time, the Aurora Borealis puts on a show behind us.

Then, sometimes, the silence is broken. Tawny owls chat in the trees nearby, and in autumn the red deer stags roar in the fields behind us. I have 3 outstanding dark-time wildlife memories: 2 whooper swans flying overhead, illuminated by a full moon; a barn owl almost brushing me with its wing as it flew past, and hearing migrating whimbrel uttering their distinctive cry in the darkness. Often, hearing can tell you as much as seeing, or more. The stags’ roar, the call of the geese and the redwings’ ‘Tseep’ mean autumn; hearing oystercatchers, skylarks and, of course, swallows, heralds spring.

All this, before you even leave the cottage.

When you do go out, you can increase your chances of encountering wildlife by visiting one of the many nature reserves nearby. RSPB Loch Lomond, for example, or the Woodland Trust’s Glen Finglas, or by looking up our own ‘Wildlife & Nature’ page. However, just going for a walk and keeping your eyes and ears open can reap rich rewards. Although – as I learned at Landmark – the wildlife isn’t necessarily going to jump out in front of you and perform, being observant and listening gives you plenty of clues as to what might be about. My regular haunt is Garadhban Forest, where rotten logs ripped apart tell of pine martens; nibbled pine cones announce red squirrels, and, in winter, high-pitched twittering in the very tops of the trees herald crossbills, which usually only appear as small brown birds flitting from tree top to tree top but which may catch the light to show off their russet tones.

And very occasionally the wildlife really does put on a show: I remember the moment I realised that the bird of prey I was watching wasn’t just a buzzard (fairly common around here), but an Osprey. A young red squirrel nibbling away at a tasty snack, on a branch right in front of me. On a remote forestry track a roe deer doe tiptoed from the trees, closely followed by her tiny, white-spotted fawn. Driving home late one summer evening several pairs of eyes reflected my headlights, belonging to a family group of four pine martens trotting along the side of the road; and on a forest walk with friends, passing by what looked like just an old tree stump, which suddenly exploded into a female capercaillie losing her nerve and leaving her nest.

So, if you’re prepared to look, listen, take time and explore, the wildlife is here for you. Come and stay, watch the birds at the feeders, and stand outside in the dark to listen to life. Ballat Smithy Cottage.

Which Way to 'Nature'?

Keep up to date with our latest news and offers